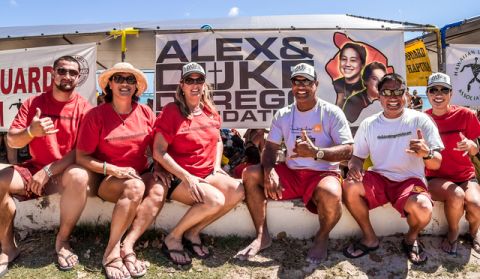 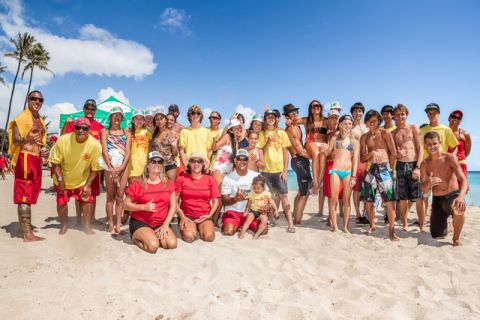 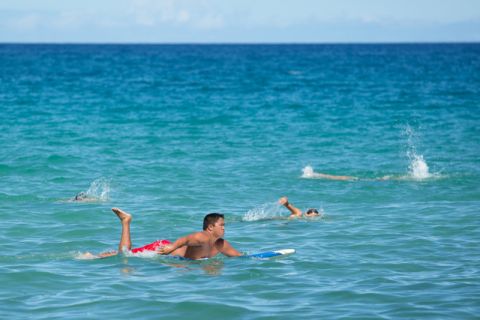 Mark Sarme, lifeguard and instructor, paddles alongside junior lifeguards in training during a morning swim. (PHOTO BY ANNA PACHECO| SPECIAL TO NHN) 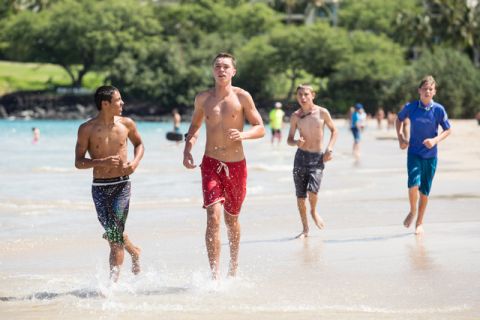 Twenty-two junior lifeguards in training run along the beach as they participate in the Alex and Duke DeRego Foundation Junior Lifeguard Program at Hapuna Beach. (PHOTO BY ANNA PACHECO| SPECIAL TO NHN)

The 22 kids who showed up at Hapuna Beach last Monday for junior lifeguard class kick-started the season with determination.

“We’re bringing up their strengths,” said Mark Sarme, instructor of the class, who had the kids doing sprints and drills on the beach. Also on the board of directors for the Alex and Duke DeRego Foundation, Sarme said the kids are learning the endurance needed for rescues.

Kids ages 13 through 17 may participate in the junior lifeguard program held at Hapuna Beach in three separate sessions. The first session began last week. Space is still available for the other two sessions that run from July 7 to 11 and July 14 to 18. The cost is $20 per participant for each four-day session, and the main requirement is that the participants be comfortable in their ocean swimming capabilities.

This is the first time that the Alex and Duke DeRego Foundation is running the junior lifeguard program. In 1996, William “Black” Abraham organized the first junior lifeguard training. Then in 2011, the Hawaii County Fire Department took it over. Shirley DeRego, president and CEO of the Alex and Duke DeRego Foundation found out in May that the junior lifeguard program had been canceled, mainly because Abraham had been involved in an accident earlier this year. She immediately called the County of Hawaii to see what she could do to help keep the program running.

“We have been a sponsor in the past, and I asked Gerald Kosaki with the County to please consider our foundation as an organization that could continue teaching the junior lifeguard program,” DeRego said. “My kids have had a hand in this, because (snapping her fingers three times) it has all gone so smoothly.”

DeRego’s reference was to her two deceased sons Alex and Duke DeRego, for whom the foundation is named, who she believes have been instrumental from the “other side” in facilitating the speed and timeliness of taking over the junior lifeguard program this year. Within 30 days, the foundation acquired a permit from the state when it normally takes 45 days to secure one. Through two grants to the foundation, they were able to purchase needed equipment, including surfboards, buoys, fins and all necessary teaching tools.

From tragedy to inspiration

It was in September of 2005 that Shirley and Lamar DeRego’s 12-year-old son Alex fell into the ocean at night while fishing. At least 70 to 100 people came every day by foot, jet ski or boat to assist in finding Alex, but his body was never found.

In May of 2010, their 14-year-old son Duke was thrown from a golf cart when the 15-year-old driver made a sharp turn at high speed. His friends panicked. They moved Duke to the side of the road and waited about 15 minutes after the accident before calling paramedics.

“When Duke fell, the kids weren’t sure what to do, because they didn’t want to get into trouble,” DeRego said. “With this program, the kids are taught to respond immediately and to get help.”

DeRego said that the death of a child doesn’t just affect close friends and family, but that it affects the whole community. She is still very much in awe of the number of people who came out to help in 2005.

“We started this foundation because we didn’t want anyone else to go through what we did,” DeRego said. “The foundation has been a vision of mine for some time — the desire to preserve the memory of my sons Alex and Duke while providing lifesaving knowledge and education to young people is an honor and tribute to their lives. To be an inspiration to our community is a privilege I take very seriously. I am dedicated to community outreach and perpetuating the legacy of my sons Alexander and Duke DeRego.”

DeRego said she “never knew there was a junior lifeguard program.” She enrolled herself and her grandkids into the program to learn about water safety, first aid and CPR.

“They had no choice,” DeRego said of her grandkids. “And it’s just been a blessing for me to be an inspiration to the community, and (being part of this foundation is) something that helps me move on.”

The beach at Hapuna is crowded with visitors and Sarme, as instructor, and his two assistants have lined the participants up to do the next drill. Though the sun is shining brightly, raindrops start to fall.

“Yeah! It’s a blessing!” Sarme yells out to the kids, who have their arms outstretched to feel the drops.

Sarme, who has been a lifeguard for 12 years now, said he stepped in to be the program’s instructor after Abraham’s accident.

“Because we are able to hold the junior lifeguard program, the participants may still be able to attend the state championships this year,” Sarme said. “It will be held on Kauai Island and we are teaching our kids endurance building techniques.”

Addressing the kids who had just taken turns paddling out on rescue boards, Sarme said, “Endurance is needed for rescues! Find the center of the paddleboard, which helps it stay buoyant. Give 75 to 80 percent of your effort when you are with the wind, and 100 percent when you are against it.”

The number one rule for being a lifeguard is prevention, Sarme stressed, and the second rule is awareness.

Azariah Seidel-Glory is a certified lifeguard who has participated in the junior lifeguard training for several years. At 17, he is proud to be part of the program, and is volunteering his time.

“My young cousin is participating, and it is great to see improvements from the kids after the training is over,” Seidel-Glory said. “I like this program, and it is so good for the kids.”

Twelve-year-old Malia Dills from Honokaa was enthusiastic as she explained why she was part of the junior lifeguard program.

“I was 10 when I heard from the lifeguards at the Honoka’a Pool that this program was taught,” Dills said. “I wanted to learn more about kid’s safety and to help my little sister. I’ve waited until now to participate.”

Her sister Kaile, now 10, is still too young to officially join, but was present with the group to learn water skills.

“When we are at the beach, and see someone who gets hurt or needs help, we can help rescue them,” Kaile Dills said.

Another student, Jayven Amanonce from Kohala said he took the course to “enhance his skills.”

“I will use these skills to the best advantage I have,” Amanonce said, while his friends teased him that he “sounded so smart.”

As the young participants swam the last drill of the day, a 200-meter swim from the group of rocks at the midpoint of Hapuna Beach to the “jump-off-rocks,” Sarme and the first finishers cheered on the last of the swimmers.

“These kids are strong and determined,” Sarme said. “They are a great group of kids.”

Space is still available for the last two sessions. Participants must be between 13 and 17 year old, comfortable with ocean swimming, and bring their own water, towel, sunscreen and swim goggles. For more information, contact Shirley DeRego at 808-960-4889 or visit www.alexanddukederegofoundation.com.