Saddling up a good time 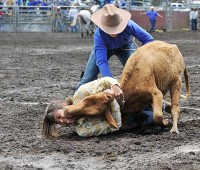 Pua Kawhaihao, in blue, and Shannon Carmichael wrestle a steer to the ground to tie three legs in the “Wahine Calf Mugging” event at the Hawaii Saddle Club’s Memorial Day rodeo Sunday at Honokaa arena. Pua roped the steer from her horse, then dismounted and helped Shannon subdue the steer, then tied any three legs. Morning rain made for muddy fun at the rodeo. (PHOTO BY JOCK GOODMAN | SPECIAL TO NHN) 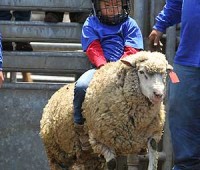 Skylynn Cantor scores an eight-second ride in the “Mutton Bustin” or sheep riding event at Sunday’s 56th annual Memorial Day Rodeo put on by the Hawaii Saddle Club in Honokaa. Some of these kids go on from sheep to calves, to junior bulls to bull riding, and fortunately for some parents, many of them don’t! (PHOTO BY JOCK GOODMAN, SPECIAL TO NHN) 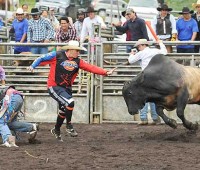 Bull fighter James MacGregor in red, distracts this charging bull while his partner, Judd Napier, at left, looks after the fallen bull rider at the Honokaa arena on May 27. The Hawaii Saddle Club and many local businesses sponsored the 56th annual Memorial Day Rodeo. (PHOTO BY JOCK GOODMAN, SPECIAL TO NHN) 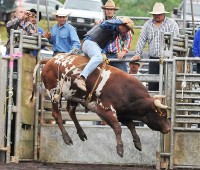 Shane Kalaniopio takes the elevator to the top floor on this high-bucking bull at Sunday’s 56th annual Hawaii Saddle Club Memorial Day rodeo in Honokaa. Despite heavy rains in the morning, a full crowD turned out to cheer on their favorite rodeo contestant. (PHOTO BY JOCK GOODMAN, SPECIAL TO NHN) 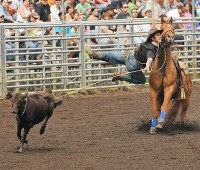 Kekoa Loando of Kona, vaults from his horse as it puts on the breaks and attempts to catch the steer he has just roped in hopes of tying any three of the steer’s legs in a timed event called “Tie Down Roping” at the Hawaii Saddle Club’s 56th annual Memorial Day Rodeo at the Honokaa arena on May 27. (PHOTO BY JOCK GOODMAN, SPECIAL TO NHN)

More than 3,000 spectators turned out for the 56th Annual Honokaa Saddle Club Memorial Day Weekend Rodeo from May 26 to 28 at the Honokaa Rodeo Arena. The organization gave away 11 scholarships to Hawaii Island students, each between $500 and $1,000, based on the proceeds of last year’s rodeo.

Manny Souza, who has been competing in the rodeo for at least 30 years, called the rodeo the “best and the biggest on the island.”

“It’s the atmosphere of the weekend and the location,” Souza said. “It’s a good venue for this type of rodeo.”

Cody Jose, 24, from Honokaa, said he, too, has been competing in the rodeo for most of his life.

According to William Andrade, of Ahualoa, one of the founding Honokaa Saddle Club members, the event began after the arena was built in 1954.

“When we started, there were no bleachers,” Andrade said.

He said they went into the forest and cut eucalyptus to build seating on both sides of the arena for 2,000 people.

“That is what the arena was built for – for cowboys and cowgirls,” Andrade said.

The wooden seating was eventually replaced with metal bleachers on one side of the arena.

Patricia Andrade, of Ahualoa, the club’s treasurer, said the event draws the largest number of contestants in the state. This year, she said there were 365 participants from all over the state and from the mainland.

“We have some really good local talent,” Andrade said.

She said families come yearly for the three-day event, making it a Memorial Day tradition.

“We are packed to capacity and we wish to grow,” Andrade said. She said she hopes they expand the county arena and park, which is much used by area residents.

She said this year, she was surprised at the number of saddle bronc riders.

“It was almost a dying art,” Andrade said. “It’s made a huge comeback, which is really exciting.”

The Saddle Club has 42 members and Andrade said there are more people joining each year.

Audrey Maxwell, who served as the club secretary for about five years, said she likes the event because it “brings the town together and showcases an event that people aren’t used to seeing on a daily basis.”