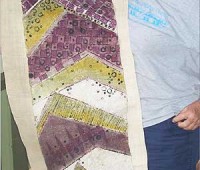 For Waimea kapa master Roen Hufford, creating her latest, extraordinary piece of kapa — with its stiffness, heavy water markings and bright purple color — stirred up memories of her grandmother.

As Hufford worked on making the kapa, she and her mother, Marie McDonald, chatted about what her pure Hawaiian grandmother, the late Etelka Mahoe, would think of their kapa making and their dedication to preserving the ancient Hawaiian art – and also what tutu would think of this particular piece.

Hufford remembers her grandmother well while growing up on Molokai. She especially remembers her tutu doing the laundry – making a thick starch in a beaten-up aluminum pan, dipping clothing in the starch and hanging the items to dry, sprinkling the clothing lightly with water from a soda bottle and rolling the items up tightly, then opening them up and ironing them. The stiffness of this piece of kapa is perfect for recalling the woman who ironed everything to a stiff finish!

“They’re happy memories of a long time ago when domestic arts were more important,” Hufford said.

She also remembers that her grandmother had a circle of friends who called themselves, “Hui Lokahi O Molokai” – the group that takes care of Molokai. They did many service projects together and then they had fun, playing Kamau (a card game like Trumps), speaking only in Hawaiian and eating crack seed.

“We kids weren’t allowed to speak Hawaiian, but we heard them talking,” Hufford said. “We really didn’t know what they were saying.”

But years later, when Hufford and her mom took a night class at the University of Hawaii, they realized that they had sort of understood the drift of their conversations, and with classes, they learned more precisely what tutu had been saying. Exactly how did Hufford make the bright purple natural dye? She used the skins of the Jaboticaba fruit, but she and her mom discovered that the color is more brilliant if you remove (or eat away) the flesh of the fruit and just use the skins — which is exactly what they did! This remarkable piece of kapa will be on the auction block at the Mala’ai school garden “Art & Sol” Summer solstice auction on June 10 at Merriman’s restaurant. For more information, visit www.malaai.org.