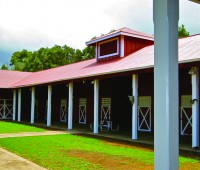 The stablesÕ renovation included power washing, new paint inside and out and general yard maintenance. 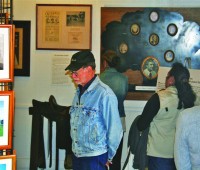 Photos courtesy Paniolo Preservation Society Those who attended the recent open house for the Paniolo Heritage Center got a sneak peek at the variety of items and photos now on display. 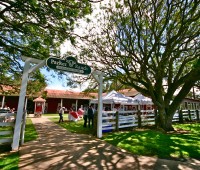 Sometimes things were just made for one another — peanut butter and jelly, Ginger Rogers and Fred Astaire, bacon and eggs and now the Paniolo Preservation Society and the Pukalani Stables.

OK, so maybe that’s a bit of a stretch but after all, the stables were rarely being used and in need a major makeover and the PPS was desperate to find a place to call their own. The result — the Paniolo Heritage Center.

“It’s been a long time coming,” said PPS president Robby Hind. “It’s kind of a relief. In my mind we finally have a place to call home but now comes the scary part — to make it viable and keep it going. This will be a test to see if the community will support it and make it a go.”

Pukalani Stables have been owned and operated by Parker Ranch for more than a century and has played a vital role in the ranch’s paniolo tradition over the year. So, it makes sense that the PPS and Parker Ranch would enter into such an agreement. But, it wasn’t that simple.

“The stables have been on our radar for at least six to seven years,” Hind said. “But at the time Parker Ranch had its tourist operation still going and was using the stables for other things. So, they weren’t all that interested back then.

“We’ve been looking for a permanent location for a long time. It was fortunate timing. Now, Parker Ranch had closed its tourist division and the stable wasn’t being used any longer. It was kind of a win-win situation for both Parker Ranch and Paniolo Preservation Society.”

Earlier this month, a good crowd turned out for the open house of the Paniolo Heritage Center where they enjoyed live music by Kimo Hoopai and Friends, food and a chance to tour the refurbished facility. An area of the stables will act as a museum of sorts with a variety of paniolo-related displays. In addition, PPS will collaborate with other paniolo heritage sites and organizations on the island, including Anna Ranch, HOEA’s PIKO Gallery, Kahua Ranch, Cowboys of Hawai’i, Kona Historical Society and Lyman House Museum to celebrate the contribution and achievements of Hawai’i paniolo, past and present.

“As far an emotion, I think it’s one of relief,” said Dr. Billy Bergin, PPS’ founding president and current vice president. “It’s something I’ve been hoping for for many years. It’s very rewarding.

“There’s so much history that comes with the building. After all, it’s more than a century old. It reflects Hawaii’s great past and its livestock history.”

Hind said they were able to secure a five-year lease with Parker for the stables. Up until now, PPS has been renting a space on Bergin’s property.

The keys were handed over on April 1 and for the next two months, volunteers came out to help give the stables a much-needed facelift. In all, Hind said PPS has spent around $50,000 for the renovation.

“First of all we had to power wash it. It was pretty filthy — there was a lot of dirt. I think we found some dead rats that were at least 50 years old,” he said, laughing.

In addition to power washing the exterior, they had it tented for termites, painted inside and out, repaired the roof and trimmed all the trees. Hind said taking the building’s age and lack of use as of late into consideration, it was “much better off than we had expected.”

Bergin said Parker Ranch improved about 40 percent of the flooring which made their job a little easier. But, there was still plenty of work for the dedicated volunteers who put in hundreds of house to refurbish the stables.

“It’s fair to say that the volunteer help was very, very significant,” he said.

Bergin said the volunteers consisted of older individuals as well as a group of young men and women “who came out in force.”

“When you have young individuals there to help preserve history, you know it will go on,” he said.

The stables will be used as a place to not only display items related to the paniolo heritage and its connection to Waimea but archives and old photos as well. One room will offer items for display as well as the Paniolo Hall of Fame. The goal is to enclose the stalls and turn them into additional viewing rooms dedicated to the ranching lifestyle.

As a way to raise needed funds, the stables can be rented out for events such birthday parties, graduations, baby luas and weddings.

“The income raised will help pay the bills and keep the lights on,” Hind said.

Hind said PPS is also looking into having local historian Anthony Roberts on hand to answer questions and offer guided tours of the facility. Another plan is to come up with a curriculum for students to learn about the history of the paniolo as well as the ranching lifestyle of today.

“Waimea is known as a cowboy town. This is way to keep that image alive and to give us our identity again,” he said.

Begin said that as of Friday, PPS had already received its fourth donated saddle. In addition, they’ve been approached by a family who would like to donate several pieces of very old koa furniture. Bergin said he’d like to see an area set up which would reflect what a paniolo household may have looked like more than 100 years ago with authentic furniture and pictures on the wall.

“It’s not just ropes and spurs — we want to show the every day life of that family,” he said.

The following is an excerpt of the history of Pukalani Stables as compiled by Bergin.

Pukalani Stables acquired its name from a historic place name of Old Waimea. The stables were built and designed by perennial Parker Ranch trustee A.W. Carter in 1909. An identical stable was built at the race track on the flat lands.

James Palaika Brighter collectively oversaw both stables while race training of the running colts was managed by Billy Carroll and later Bill Breitha. As Brighter’s responsibility included the breaking pen, a series of rough rider foremen oversaw day-to-day operations of basic horse training. Oversight of Pukalani Stables was executed by Samuel Awaa Sr., along with George Keola Lindsey and William Duncan. Each stall served as home to a stallion during and after breeding season. Fourteen individual box stalls housed stallions of Thoroughbred, Standardbred, Morgan, German Coach, Percheron and Belgian breeding.

In the early 1950s, William Lindsey (Billy Mainaaupo) took over the Pukalani Stables and upgraded the farrier’s bay to include shoeing stock. Behind the farrier’s bay stood a two-story house occupied by Theodore Vredenburg. Mainaaupo’s treatment of the Pukalani Stables was a dramatic upgrade in landscaping, building care, stall repair and turnout paddocks for stallion exercise.

Shaped like a inverted “U” when viewed from the entrance, the stables were designed as 12X12 foot stalls with rafter heights of 18 feet. As is found at all barns, stations and saddle houses, a small kitchen/dining area was included at Pukalani Stables’ facilities. A small wood (and later kerosene) stove were set in a corner of the comfort room where hot tea was rendered during short, mid-morning or mid-afternoon breaks.

Richard Penhallow, upon succeeding the stoic Hartwell Carter as manager, took a very different direction — wanting to “open the gates of the ranch.” His plan was to let the public, in an organized manner, enjoy the beauty, splendor and natural resources of the ranch through tourism and engagement of interest groups encouraged to come to Waimea.

In 1972, the Rubel and Lent team assumed ranch management. Livestock manager Walter Slater immediately established the orphan calf program and Pukalani Stables became home for anywhere from 20 to 30 dogey calves. Fred Stevens was the caretaker doing a good job on the calves as well as in maintaining the grounds in a respectable manner.

Pukalani Stables was renovated to allow public access to view various ranch exhibits artisian/crafting demonstrations and visits with retired ranch cowboys. While the prices were reasonably ranged between $10 to $40 per person, the project collapsed having no coordinative support from the tourist industry.

In the last few years before Smart’s death, there was a marked decline in maintenance of all ranch facilities and Pukalani Stables fell into disrepair mainly from lack of use.

In 2010, Paniolo Preservation Society began negotiations to lease the south wing of Pukalani Stables to house its archival collection and displays. Parker Ranch responded with a generous offer giving PPS an opportunity to utilize the whole barn including the Luau House and the adjacent stallion pens.