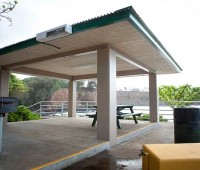 The pavilion overlooking the ocean at Keokea was also renovated as part of the repairs to the park. (PHOTO BY ANNA PACHECO|SPECIAL TO NHN) 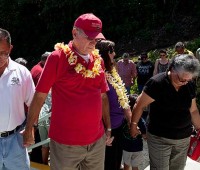 Councilman Pete Hoffmann was among the dignitaries who were present for the grand re-opening of Keokea Beach Park on May 12. (PHOTO BY ANNA PACHECO | SPECIAL TO NHN) 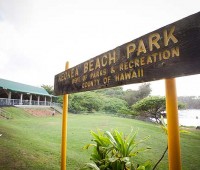 On May 12, Keokea Beach Park held a grand re-opening, celebrating the completion of repairs to the buildings that had sustained earthquake damage in October 2006. (PHOTO BY ANNA PACHECO|SPECIAL TO NHN) 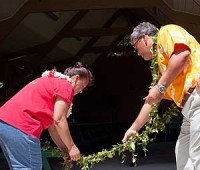 Mayor Billy Kenoi assists with the ceremonial untying of the maile lei at the grand re-opening of Keokea Beach Park. (PHOTOS BY ANNA PACHECO | SPECIAL TO NHN) 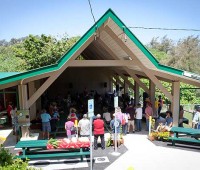 Community members gathered on May 12 to celebrate the grand re-opening of Keokea Beach Park, which sustained damages in the October 2006 earthquake and had to undergo renovations. (PHOTO BY ANNA PACHECO|SPECIAL TO NHN) 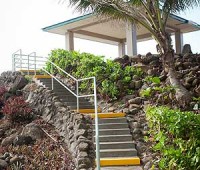 By Melora Purell Special to NHN

Akoni Pule was a humble, soft-spoken public servant who represented Kohala in the Hawaii Legislature from 1946 to 1969, and was at the same time a part-time county employee – the caretaker of Keokea Beach Park. The highway that bears his name runs from Kawaihae to Pololu Valley, and was completed in 1974, a few years after his death. It was just one of his many contributions to the safety, economic development, and education of the Kohala community.

Pule’s granddaughter, Sarah Pule-Fujii, was raised by her grandparents, and remembers the lessons of kuleana (personal responsibility) that she was taught.

“When we went to Keokea Park when we were little, we had to pick up all the leaves before we got to go in the water,” she said.

Pule-Fujii carries on her grandfather’s legacy of kuleana for the park by serving as president of the Friends of Keokea Beach Park.

“He loved the park, and we love the park, too,” she said.

The Friends of the Park took action about two years ago, when it was clear that budget cuts had put the county in a position where it was not keeping up with routine maintenance.

“There were plugged sinks, crumbling stone walls, and rusty barriers,” Pule-Fujii said. It was a safety hazard and the community wanted to get the repairs done. The Friends group wrote a petition, got hundreds of signatures, and took it to Mayor Kenoi.

“We got his attention,” she said, “and he made sure the work got done.”

With minor repairs completed, the Friends of Keokea Beach Park turned their attention to the county’s plan to do major renovations on park buildings that had been damaged years before.

On October 15, 2006 a devastating 6.7 magnitude earthquake near Kiholo Bay rocked Hawaii Island, causing damage to homes, roads, resorts and public facilities. Keokea Beach Park, which is just down the road from Kapaau town in North Kohala, sustained substantial damage to its structures, which were subsequently closed to public use for more than five years.

The $1.4 million park renovation included fixing extensive earthquake damage to the main pavilion and modifying the entire park so it complied with federal accessibility requirements. In addition to the park’s new paved walkways, its main pavilion was enlarged and relocated further away from eroding stream banks, the kitchen was completely renovated, and new restrooms were constructed.

Bids for the construction project went out in early 2011, and the county contract was awarded to Isemoto Construction.

The work on the park is the county’s final Kiholo Bay earthquake-related project, which also included joining Ikuo Hisaoka Gym at Kamehameha Park in Kapaau, Paauilo Gym Annex and many others that also underwent safety repairs before being reopened for public use.

“It’s been a long wait on the repairs, but it will be well-served in the community,” said Honma.

“Although the park has remained open since the earthquake, we understood the critical role the main pavilion plays in providing the community a safe, attractive and appropriate venue for family parties and public gatherings,” Department of Parks and Recreation Director Bob Fitzgerald said.

“We truly appreciated the community’s patience and understanding as we pursued the comprehensive upgrades that will serve the community and park visitors well for many years to come,” said Fitzgerald. “We are proud of the final outcome.”

“The day they started the repairs was the happiest day of my life,” said Pule-Fujii, who went to the park every day during renovations to take pictures of the progress.

The Friends of Keokea Beach Park put the finishing touches on the repairs.

“I put up fliers around town two weeks before our big park clean-up on April 28, and we got 73 volunteers who came out to help,” said Pule-Fujii. “We painted, planted, raked, weed wacked, mowed, cut, chipped, cleaned and poured aloha into our park,” the group posted on their Facebook page after the event.

We worked together with the county to get things done, said Pule-Fujii. For example, the county provided new picnic tables, as well as the supplies for painting them. The volunteer crew did the work.

“We got it done, then came back the next day to make sure we didn’t get any paint on the new floor,” she said.

The Friends group has no operating funds, said Pule-Fujii. “Everything is donated; people give their time, they buy the plants that they plant. They bring their own equipment like weed eaters. Even the use of the chipper was donated.”

The next goal for the Friends of Keokea Beach Park?

“We will continue to have community work days to maintain the new things at the park, maybe once every couple months. People should look for the fliers around town in Kohala, and check out our Friends of Keokea Beach Park Facebook page,” said Pule-Fujii.