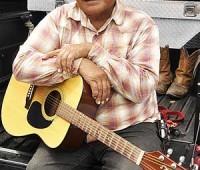 Karin Haleamau will perform with his family at the Paniolo Preservation Society Talk Story Night on July 21. (PHOTO COURTESY OF THE PPS FOR NHN)

Karin Haleamau, a former cowboy, learned many skills from his uncles, dad and other relatives. He learned how to tend to horses and cattle, how to fix broken fences, and how to take care of the land, among other things. An accomplished slack key guitarist and singer, he also learned from his elders how to make music.

“Our music is mostly about what has happened to the land and what we expect to have in the future. It’s also about the lifestyle, how we were brought up and how the land provides for us,” said the 72-year old. “It was something that was passed on to us from my uncles, my dad and grandmother. We listened to them and have carried it on.”

“This music is folk music. It is music from the hills and it is about the hills,” said Billy Bergin, former Paniolo Preservation Society president. “Sometimes songs are indigenous to a particular ranch. That is one of the things that makes this music very special.”

Born into a family of three generations of paniolo on both his mother and father’s side, Haleamau worked at Hu’ehu’e Ranch, established on the slopes of Hualalai in 1886, for 30 years. Much of what he learned about ranching came from his dad, Herman Kahaiwai Haleamau. Herman Haleamau began taking Karin to work with him when he was 6 years old. Karin also learned a a lot about music from his father.

“The cowboys used to get together with each other and play their ukeleles and guitars and sing songs that were so touching that came from the land,” he said. “We would ask them, ‘where did this song come from,’ and they would say from here and there.”

Haleamau has made a name for himself in Hawaiian folk music. He has performed at Carnegie Hall in New York City, Wolf Trap, a performing arts center in Virginia, outside of Washington, D.C., and at other cultural events in Hawaii and on the mainland. Keeping with his family tradition, Karin also passed down his love of music to his four children. His son Gary is a professional musician.

“My children are trying to make their own music,” Haleamau said. “They all love music. They are blessed. This music is a gift. My children have it and my grand kids have it.”

Bergin hopes that people who attend the upcoming Paniolo Preservation Society Talk Story will get a sense of how music fits into family traditions and the importance of family passing down these traditions to young people.

“It all comes back to the family circle and the values of keeping people together by music, by food, by work and by the traditions,” Bergin said. “This all happens in the family circle. It’s all very healthy and almost a lost tradition in our country.”

Doors open at 5 p.m., an hour before the program begins, and visitors may bring coolers or purchase food at the free event from vendors. Chairs, blankets and coats are recommended. For more information, visit www.PanioloPreservation.org.