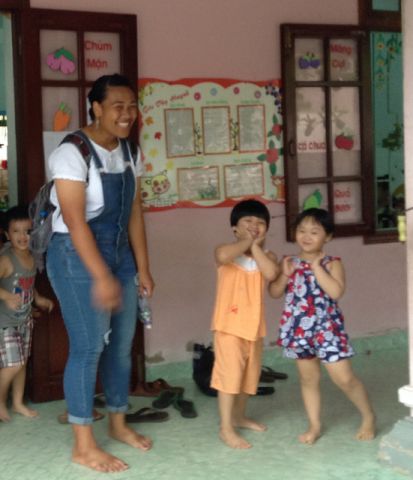 Today, Vietnam like many developing nations, strives for the national goal of industrialization and modernization. This is evidenced in the extreme amount of construction of bridges and roads.

As countries take to globalization, the term “flat” becomes more commonplace. “Flat” describes the leveling of the “playing field,” where all competitors, from Bangladesh to the Bahamas have equal opportunity. Comparing Vietnam to the United States paints a stark picture, where Vietnamese earn 94 percent less income. With nearly three quarters of the population living in rural regions, the population is now moving in the direction of cities, Hanoi and Ho Chi Minh City (Saigon) respectively.

Farmers and sons and daughters of farmers now look for work in manufacturing industries like machine building or garment and shoe production. Multinational companies include the likes of Samsung, Canon, and Nike. In a country of 93 million people, where more than 65 percent of the population is under 25 years of age, youth and the quickened pace of life is reflected in the 35, give or take a million, mopeds flooding the streets.

One pillar that appears to hold up to the flood of change is familial connect and the power of iconization. This powerfully resonates, appearing to be timeless in post revolutionary Vietnam. Manifested both in Vietnam and Cuba was the use of nicknames.

More powerful than the names, imminent images of Vietnam’s superhero status “Uncle Ho” Chi Minh are in all classrooms, often with phrases beneath translated to say, “All students love Ho Chi Minh” or “Study and follow the ethics of Ho Chi Minh.” Whether one is friend or foe, Ho Chi Minh personified a Vietnam that five decades later, longs to be realized. One where there is an insatiable thirst to acquire English language skills and improve one’s career path.

One woman by the name of Hai clearly understands the importance of English and its potential to open what otherwise might be firmly shut doors. After toiling for years in jobs that paid less than 40 dollars a month, Hai’s English skills allowed her to seek employment within the tourism industry and she successfully managed to work her way up to a managerial position in a local hotel, now earning a salary close to 10 times as much as before. Far better, but still challenging to provide for extended family living and working in an agricultural sector on the edge of town.

After sharing a week with kindergartners at Truong MN Son Ca private school (meaning, “The Nightingale School,” a befitting name as the nightingale is a small bird best known for its powerful and beautiful song), the visiting Hawaii teens spent their mornings at Smart Tutoring English Center. This nonprofit venture began in 2011 by Campbell high school’s (Ewa Beach, Oahu) Karen Chun and her Vietnamese friend and partner Chi.

Similar to the first week, students promoted English through literature and the arts. Picture books included “Corduroy,” “Minerva Louise” and more. STEC’s vision is for students to be confident and competent citizens who are fully engaged in the global society.

For $25 a month, student tuition includes a holistic curriculum that includes enrichment so students may transition from pre-school “flyers” to “pre-beginners.” Then, from “starters” to ultimately “movers” who are able to utilize English for c. This later group caters to high school students and working adults.

At Hawaii Preparatory Academy’s annual Pumpkin Patch fundraiser, the Students Helping Students Club successfully raised money that unbeknownst to them at the time, would possibly change the lives of two Vietnamese girls. Two partial scholarships were provided to the nieces of humble and gracious Hai. Understanding firsthand the importance of English, Hai was thrilled to contribute to the other half of the scholarships awarded to her two nieces, while already providing the opportunity to attend STEC for her son.

Outside the classroom, Hawaii students had an opportunity to take a 20-kilometer bicycle tour through the countryside — their favorite activity. Passing through several sparse fishing villages, students and teachers alike were impressed by the numbers of children who rushed to greet us with a high-pitched hollering of “Hell-O!”

Stopping wherever our attention was captured allowed for a closer examination of life outside the city. Students were intrigued by the women who were up to their chins in the river, combing through the muddy banks with their hands and feet, in search of clams. So too was there interest in the sweeping beauty of the rice paddies. Curiosity piqued at one of our watering stops, looking on as a woman panned the recently harvested black sesame seeds.

Most alluring was the local recycling efforts where inquiry was made about the value of an aluminum can or HI-5 comparable plastic bottle. Careful math led to a dire result, where to our chagrin, it was found 500 recycled cans or bottles equated to the price of the same object being recycled in Hawaii.

Our guide generously shared dinner with us at home. The final leg of our journey was to cross the river by ferry, but not before passing by door-less and furniture-less “shells” where generations kept air conditioned by being strewn across the cold concrete floors.

A window into a haunting part of Vietnam’s past was shared by a guest invited to dinner one evening. During our visit, Phuong Nguyen, a Vietnamese Agent Orange representative for the province of Quang Nam, gave the dangerous chemical “a face.”

Phuong told of how her father, during the Vietnam War, or American War as the Vietnamese call it, covered himself with a rain jacket as the extremely toxic dioxin compound fell from the sky. Not understanding the Monsanto Corporation and Dow Chemical creation, nor the effects of this dangerous “rainbow herbicide,” it did not cross Phuong’s father’s mind to “waste” precious water to wash the chemical off. Years use of the jacket and decades later, the effects would surface not only in his degenerative spine but also passed on to his offspring (Phuong). Students asked a multitude of questions, leaving more knowledgeable but also sensitive and aware of a reality different than what has been read in books or experienced in Hawaii.

The three weeks in Vietnam passed much more quickly than anyone may have imagined. Students graciously offered their whole selves, in the classroom and throughout all cultural activities. We return with a renewed perspective, anxious to share pictures, stories, and enduring memories with our Hawaii Island and Oahu friends, family, and communities.