Gateball: the best game you never heard of 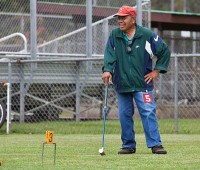 Alfonso Mitchell waits for his turn during a Monday gateball practice at Kamehameha Park in Kapaau. (PHOTO BY ANNA PACHECO|SPECIAL TO NHN 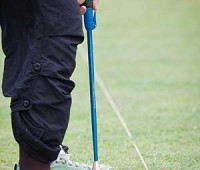 Gateball originated in Japan and bears many similarities to croquet. It is now played internationally and is popular as a low-impact sport. (PHOTO BY ANNA PACHECO|SPECIAL TO NHN) 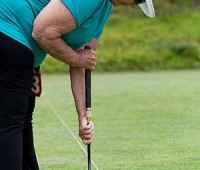 Kathleen Donovan, from Waikoloa, plays gateball at Kamehameha Park in Kapaau on June 18. (PHOTO BY ANNA PACHECO|SPECIAL TO NHN) 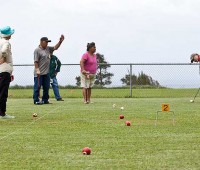 Coert Olmsted lines up his shot during a gateball game while other players look on. 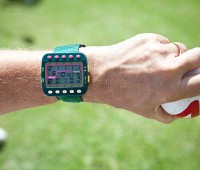 An electronic watch-like device allows Coert Olmsted to keep track of the score during a gateball game. (PHOTO BY ANNA PACHECO|SPECIAL TO NHN) 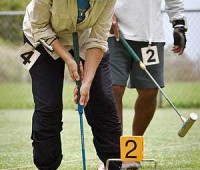 Maggie Frohmader lines up her mallet to tap her ball through one of the three gates that are positioned on the gateball field. (PHOTO BY ANNA PACHECO|SPECIAL TO NHN) 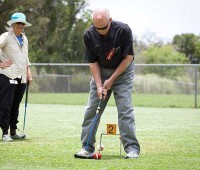 Elder Jerry Rapier, a visiting Mormon missionary, plays gateball for the first time with the Kohala team, while Maggie Frohmader looks on. (PHOTO BY ANNA PACHECO|SPECIAL TO NHN) 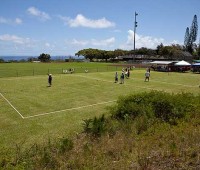 Kohala hosted a gateball tournament on June tenth at Kamehameha Park, with teams coming from as far away as Kauai. (PHOTO BY ANNA PACHECO|SPECIAL TO NHN) 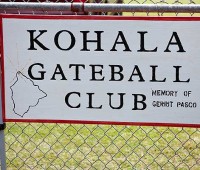 Every Monday, from 12 to 2p.m., members of the Kohala Gateball Club meet to practice at Kamehameha Park. New players are welcome to join. (PHOTO BY ANNA PACHECO|SPECIAL TO NHN)

“Oh I’ve been playing 17 or 18 years,” said Lucy Pasco, president of the Kohala Gateball Club. She unzips the plastic case and threads the head onto her metal mallet. Around her wrist, she wraps the highly specialized electronic NEMCO Gateball Timer from Japan. “We’re one of the younger groups,” she adds with a smile.

Gerrit Pasco Gateball Park, named for Lucy’s late husband, is a rectangle of grass, tucked between the swimming pool and the Veteran’s Field in the Kamehameha Park Complex in Kapaau. For the club—Pasco, Alfonso Mitchell, Coert Olmsted, Elaine Kawai, Mino Nakasato, George Rivera (Max Gutang, Tito and Patsy Pasco were absent)—it only takes a few minutes to set up.

There are three numbered metal hoops or gates in a triangle and a center post called “agari,” which a player strikes last. They will play in teams of three, the men against the women.

“When I first got into the sport, my friend Jimmy Tohara said, ‘Hey, Lucy, I’ve been going to Hilo to play this game …,’” Pasco said. “I was dancing line dance at the time, so when he told me about gateball, I said, ‘no way, forget it.’ But he loaned me a couple of mallets and myself and Emma Glory gave it a try.”

As military wives, she and her friends were in a croquet club, so it seemed OK.

“We started to get together and I told my husband, ‘Hon, why don’t you try?’” Pasco said.

Hats, shades, sneakers, NEMCO timers synchronized, smiles on their faces, the players begin. Timing is crucial to the 30-minute game; and a player or “striker” only has 10 seconds to hit the ball between shots, while teammates strategize and call out instructions. There’s a surprising amount of action and animation, a lot of laughs, and a little bit of rain.

“My husband hated the game at first,” said Pasco, “but after the second time, when we got together and made a club, he practically read the rulebook—like religious people read the Bible.”

The two played together for many years.

“We would go to Hilo and stay in a hotel three or four days and play with the Hilo clubs,” she said.

Gateball is kind of croquet-on-the-move, where two teams of five players (or less, depending) advance their ball through three separate gates for one point each, then strike agari for two, to finish. You only go around once, and once you strike agari, your ball is out of play. Players can stroke the ball sideways like a golfer, or between the knees like croquet. Either way, it’s the sound of satisfaction when metal mallet thwocks wooden ball.

“The hardest gate to get through is the first one,” said Maggie Frohmader of North Kohala, a player since 1996.

Sounds simple enough, but the twist in gateball is a move called the “spark.” Players earn a spark by striking or “touching” another ball with their own. They can then pick up the touched ball, place it next to their own, and, holding their ball down with one foot, strike it so the other ball moves in the direction they choose. Used offensively or defensively, a spark can help position a teammate’s ball in better scoring range, or whack the opponent’s ball out of bounds.

During a brief rain delay, everyone pauses their timers and huddles under a tent, sides hastily slapped up on the windward side in two shakes. Mino Nakasato, who has put down his cane to carry his mallet, says he’s been playing for about ten years, and the weather doesn’t bother him.

“I love the game so much I couldn’t stop playing,” said Naksato. “It’s like taking a shower for two hours.”

Invented by Eiji Suzuki in Hokkaido, Japan, in 1947, gateball was intended to be inexpensive recreation for young people. After the war, there was a shortage of rubber, used to make balls for many sports. A lumber worker, Suzuki saw that wood was plentiful for croquet balls and mallets, so he revised the rules to pick up the pace and make it more fun.

The game soon gained popularity and was introduced to women’s groups and seniors clubs in Kumamoto City by a physical education teacher. In 1962, the Kumamoto Gateball Association was formed and gateball began to grow nationwide and go global.

Today, there are millions of gateball players across the planet, many aspiring to play in the World Gateball Championship, held every four years. The 2010 tournament in Shanghai welcomed 96 teams from Australia, Brazil, China, Chinese Taipei, Hong Kong, India, Indonesia, Japan, Macau, Paraguay, the Philippines, South Korea, Russia and the U.S.

“The first year I played, we went to the international tournament in Honolulu at Ala Moana Park,” said Frohmader. “There were teams from Brazil, Asia, all over.”

Even though it’s originally a Japanese game and popular among the Asian population here, Frohmader said that theirs and other groups in Hawaii embrace a real mix of people, with many different ethnicities and ages, playing together.

“It’s an international team, but we all learned how to count to ten in Japanese,” said Frohmader. “Our gateball club is a family.”

“There are so many opportunities to travel the world with this game,” said Waikoloa’s Kathleen Donovan, who’s been playing about four years. “Just find out where they’re practicing—it’s an instant welcome.”

Kathleen, like so many of her teammates in Waikoloa and Kohala is unabashedly in love with the game.

“We’re the ‘working generation,’” she said, “and I never got the chance to play team sports. But look at this. Now I’m an athlete in two languages!”

She proudly holds up a souvenir bear and name badge from the Shanghai tournament.

“We played in rice fields in Japan,” said Pasco. “We played in pastures and indoors on the turf. The domes are beautiful!”

For both Pasco in Kohala and Donovan in Waikoloa, the hardest part of the game is recruiting. They are always looking for players to fill two teams and play.

The Kohala Gateball Club meets Monday at 12:30 p.m. at the park. Extra mallets and lots of advice are readily available and there is no charge.

“We really want to invite people to come and play,” said Pasco. “My grandchildren play; they have their own mallets and all … It’s fun, it’s social and it’s a good way to get out of the house and move.”

Donovan said that Waikoloa’s Gateball group is struggling to find enough members to cover recent losses to the team. Players who used to come from Honokaa are finding the gas expense to be prohibitive, so Donovan will drive to Kohala, or sometimes to Hilo, to get her fix. And, windy or not, she faithfully packs up her mallets and goes to the new park (very end of Iwikuamo‘o Street) on Tuesdays and Fridays at 4:30 p.m.

“I just want some people to play with because I want to get over there and beat Kohala!” Donovan said.