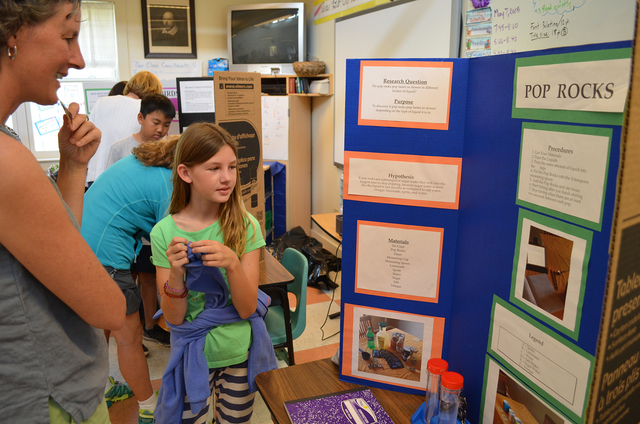 A Parker School fourth grader shows her experiment to a visitor. (PHOTO COURTESY OF PARKER SCHOOL)

Parker School students wowed the community with their accomplished science projects in mid-May at their own science fair.

The fourth and fifth graders started with their own research question and completed projects over a two-month period. Winners were determined by highly esteemed scientists based on how accurately they followed the scientific method process.

Fifth grade’s first place award went to Ben Kubo for “The Science of Keeping Your Cool.” His goal was to determine which material is best at keeping a juice pouch the coldest in a lunch box without using ice by testing Styrofoam, cotton batting, wool, aluminum foil, neoprene and bubble wrap. Fourth-grader Ellie Acosta won first place for her “Gummy Bear Soak” project to see if gummy bears change in size or shape when placed in acidic or non-acidic liquids.