Coming out of her shell 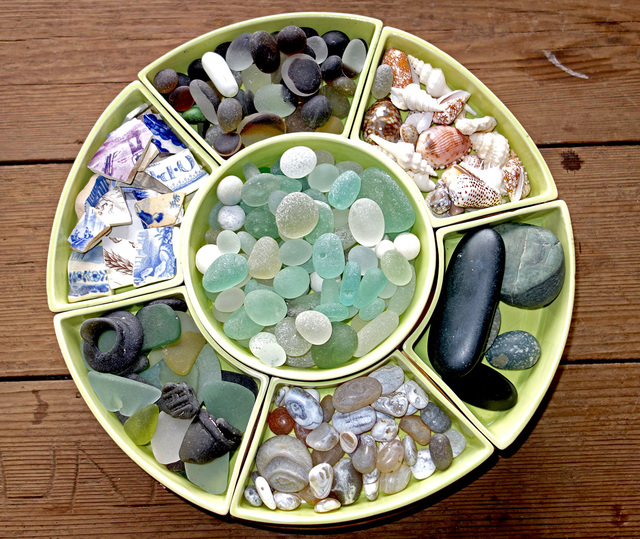 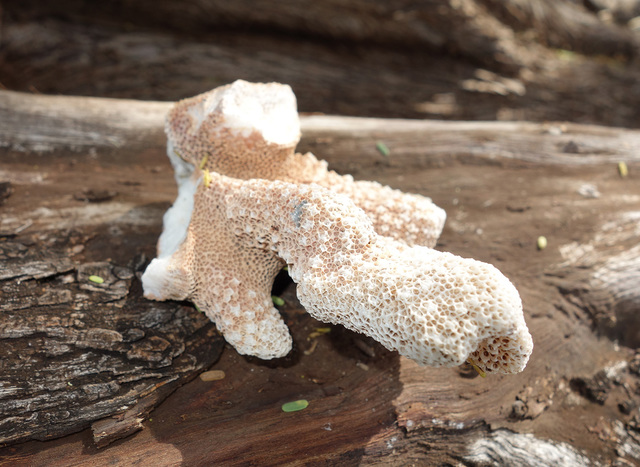 Dr. Beachcomb says shells can be found on the top part of the sand, under rocks or where the waves break. (PHOTO BY LANDRY FULLER) 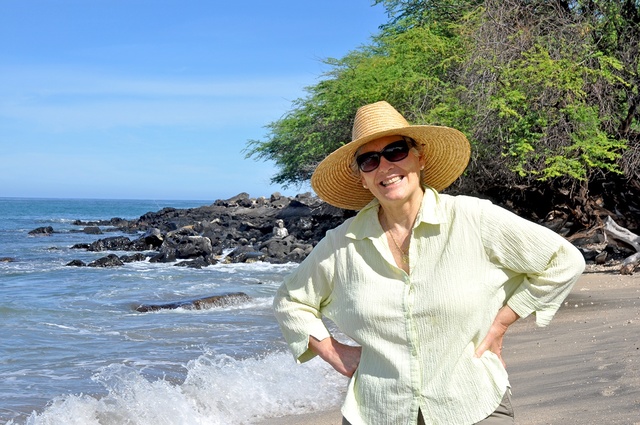 Dr. Beachcomb believes combing the shores isn’t just relaxing, it can be healing too. (PHOTO BY GEORGE FULLER |SPECIAL TO NORTH HAWAII NEWS) 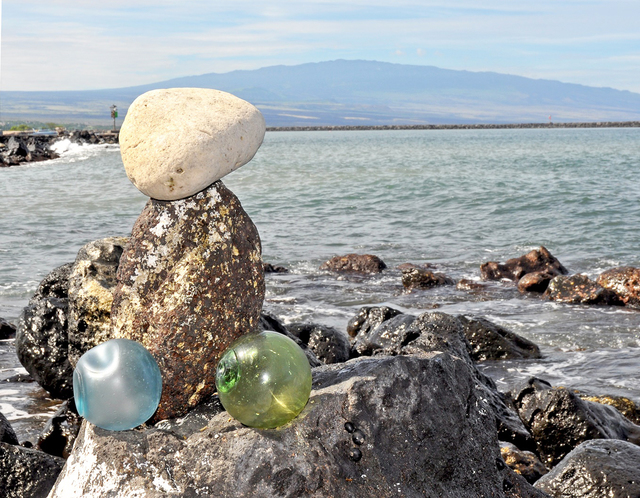 Glass fishing floats are green and blue and can be fun decorations. (PHOTO BY GEORGE FULLER |SPECIAL TO NORTH HAWAII NEWS) 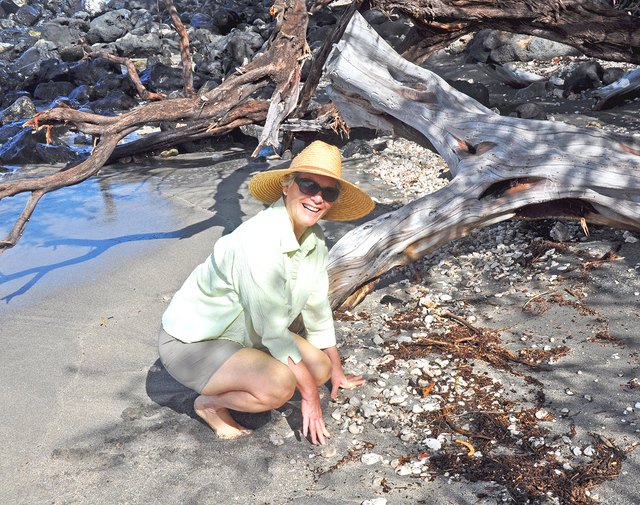 Dr. Deacon Ritterbush, more commonly known as Dr. Beachcomb, finds an hour or two of beachcombing therapeutic. “It isn’t just relaxing, it is healing too,” she says.

Bequeathed her nickname in the summer of 2006 by a student while on a beach expedition, it is a moniker that she lives by. In fact, she credits beachcombing as one of the most important things in her toolkit for health.

“Beachcombing is when you wander along a shoreline, looking for treasures,” she says.

A cultural anthropologist, eco-educator, award-winning author and consummate beachcomber, Dr. Beachcomb has given lectures in North Hawaii, Hilo and North America on sea glass, genres, the archaeology of beachcombing, the stories beaches have to tell and beach pottery. Her book, “A Beachcombers’ Odyssey: Treasures from a Collected Past,” (Ritz Dotter Publishers, 2008) focuses on treasures discovered at beaches in Hawaii and around the world.

A lifelong devotee of beachcombing, her mother and grandmother were her mentors. “It was different when I was little,” she says, “collecting pretty things, listening to the ocean and finding whelk shells on the Jersey Shore. As I got older, I liked quartz. It’s very soothing. I learned later that it grinds down slowly and becomes sand and when heated becomes sea glass.”

Now a resident of Waimea, over the past 40 years she has lived in Fiji, Tonga, Samoa, Oahu, the East Coast on the mainland and Scotland. Married to an archaeologist from the Kingdom of Tonga, Dr. Beachcomb received her Ph.D. from the University of Hawaii and has worked or consulted for E Ola Nau, Okeanos Foundation for the Sea, and the East-West Center, among others. Currently, she is the Big Island program coordinator for the Pacific Gateway Center on Oahu that helps immigrants, refugees and low-income residents of Hawaii become self-sufficient.

In 2009, she founded the International Beachcombing Conference, where coastal authors, artists, historians, geologists and anthropologists share their knowledge with beachcombers. This year it’s being held on the West Coast for the first time, on the Olympic Peninsula in Washington, Oct. 7 through 11. Dr. Beachcomb says the beaches there are like a treasure chest, filled with petrified wood; stones such as agates, jasper and carnelian; fossilized shells; glass fishing floats; beeswax balls; pumice; shipwreck artifacts; stone orbs and the occasional shard of sea glass or pottery.

“I wanted to create a venue that could bring people together who are both experienced and novice beachcombers to really learn more about the history of the science behind it, not just the collecting – sharing knowledge, treasures and the beach,” she says.

Back in North Hawaii, some of Dr. Beachcomb’s favorite beaches include those off the beaten path in places such as Kapaau, Puako and Kawaihae Harbor.

“I find the most shells after high winds and waves,” she says. “It’s pure joy and fun, and you’re exploring, having adventures.”

Dr. Beachcomb likes to delve deeper into the history, science and spirituality of beachcombing, as well as coastal and marine conservation issues.

“I draw on my research skills and anthropology background to learn more about the artifacts I find,” she says. “This leads me to more ‘combing expeditions’ for facts on the evolution of our planet.”

So where did the pastime begin? “They were originally called wreckers in England,” Dr. Beachcomb explains. “When vessels and merchant ships wrecked, those who lived nearby suddenly got clothing, booze and many other things the waves brought in.”

She continues, “In America in the 1700s and 1800s they were called scavengers or moon-cursers. They would go and watch for the wrecking boats up and down the East Coast, and at times they would sometimes purposely cause boats to capsize by confusing the captains, making them land on the shoals and wreck.”

Once a hobby, beachcombing took on a new role in her life in 2006.

“While in Maryland writing a book, I would take long walks down the beach, contemplating the plot,” she says. “I began questioning why I was finding certain things there, like French pottery shards or clay pipe stems that dated back to the late 1700s. I also wondered, ‘Why does one beach have oyster shells on it, but the two beaches down have no oyster shells but lots of iron ore?’ l began to take a whole new look at beachcombing.”

Some of her favorite finds are pottery shards. “They tell stories – how old something can be, where it came from, if it’s American, English, Japanese or who designed it,” she says. “A lot of the pottery shards here on Hawaii Island come from the old plantation communities.”

She says there are different ways to beachcomb. “Lots of times it’s luck. Other times you have a vision of something you want and it turns up at your foot. It’s a little serendipitous. A lot of it is becoming familiar with a beach and finding things that don’t fit in with the natural pattern there. For instance, looking for something a different color, or shaped differently. At certain beaches you comb over the top part of the sand and others you look under rocks. You can find some of the best shells standing right where the waves break, but you have to be very quick.”

She advises, “Go to beaches where other people don’t go. When you have a series of rough waves and weather, take an early morning hike and you will find something. Try to go two hours before or after low tide.”

It’s not just learning how to look, it’s learning what to look for. “Here in North Hawaii you can find shells, coral, pottery shards, sea glass, marbles, fishing floats and sea beans,” she says. “One of the rarest things here is a type of sea glass that resembles stone called slag glass, found on the Hamakua side of the island. It comes from trash burned in plantation furnaces that was thrown over the river. They look like turquoise and jade and are exquisite, with colors ranging from pale cream to black, but mostly dark blues and greens.”

Dr. Beachcomb has treasures to show for her experience, but she doesn’t hoard them. “I like sharing. I refine my collection, pick out the ones I don’t have many of or if it’s a bigger size, and the rest I usually put in bags and give away,” she says. “Sometimes I make beach pupu trays decorated with shells that are sold at The Gallery of Great Things in Waimea.”

Beachcombing can become an obsession. “Some people can be covetous, not sharing shells or beaches with others,” she says. “Selfishness and hoarding are unhealthy. True beachcombers refine their combing and learn to just keep the best of the best.”

From an environmental standpoint she feels beachcombers need to be responsible. “Shells should be ethically harvested,” she says. “Beachcombers are conservationists. Right now, because of the acidification in our oceans, shells are getting weaker and more fragile.”

As for sea life, she says, “No one should be harvesting shells with mollusks living in them because they are so endangered. That’s not beachcombing, that’s trophy hunting. Ethical harvesting is only of shells that are empty.”

Dr. Beachcomb also finds spiritual and health benefits along the shoreline and encourages people to get outside in nature and play regularly.

“People have always loved to be on the beach,” she says. “It gives us comfort and calms us down. It’s a stress releaser with concentrated attention on the now, so it’s really an act of meditation. It’s very Zen-like. At the beach you’re not worried about what happened yesterday or a meeting with your boss tomorrow. It gives your brain time to rest.”

Last year, Dr. Beachcomb took her own advice to heart after being diagnosed with cancer.

“I learned that my body is just a shell,” she says. “On some beaches there’s such a silence it feels very godly, an energy I felt really helped me with cancer. Because I couldn’t be out in the sun during that time, I visualized myself beachcombing in my belly – removing ‘plaque,’ collecting black pieces of plastic that were embedded through the sea anemones inside of me to get out the cancer. I believe that beachcombing is a panacea for everything.”

Cancer-free and healthy now, Dr. Beachcomb has bright ideas for the future.

“Beachcombing is an antidote for marriage, retirees, and people dealing with stress from their jobs,” she says. “Just to get out there for two hours beats booze. I think beachcombing might be helpful for people with PTSD.”

She is also finishing her second book on beachcombing scheduled to come out in early 2016, and a TV series on where to find the most fascinating treasures.

“Beachcombing has been a saving grace over and over in my life,” she concludes, “and nowadays I turn to it frequently not only for treasure hunting but also for solace, joy, peace and clarity.”

For more information on the upcoming International Beachcombing Conference, go to http://www.thebeachcombingconference.com/index.html. Or learn more about her book, “A Beachcombers Odyssey” on Amazon.com.