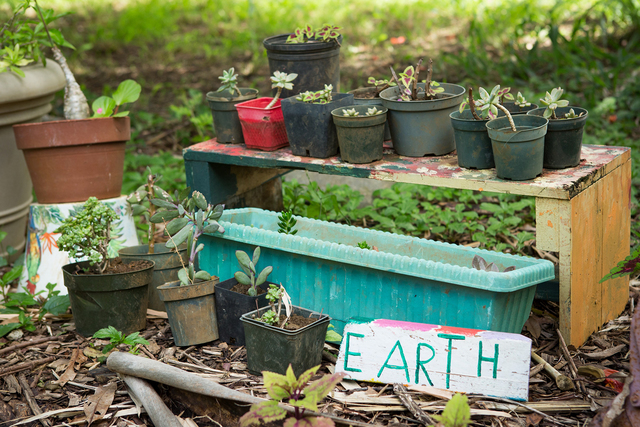 Plants potted by pre-school aged children in a playgroup make up a small garden on The Hub grounds. (PHOTO BY ANNA PACHECO | SPECIAL TO NHN) 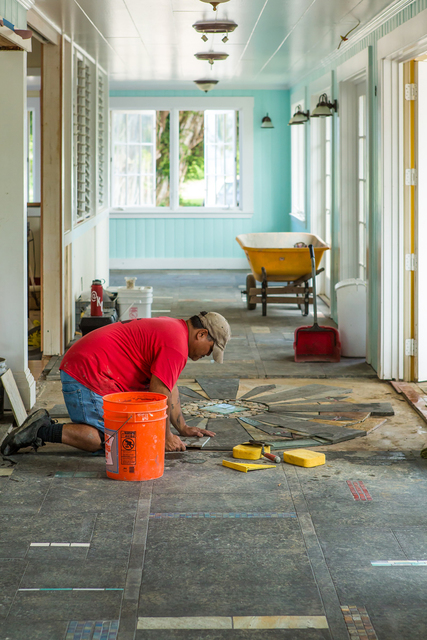 Installation of new tile and flooring are among the many improvements made in the renovations of The Hub buildings. (PHOTO BY ANNA PACHECO | SPECIAL TO NHN)

Built on generations of people who knew what it took to sustain a healthy vibrant community, the spirit of Kohala has further awakened with the creation of the new Kohala Village Hub (KVH). Built on the grounds of the old Kohala Village Inn, an historic gathering place for the community, not only will the Hub provide food sustainability, but it has already begun to feed and enrich the artistic souls of this multi-talented community.

The property was purchased by Bennett and Delphina Dorrance in March 2014 and is under the auspices of Feed Hawaii, an older non-profit organization mostly from the West Kona area that did agriculture and food sustainability education, according to Ah Sam.

“They recognized that Kohala needed the support of some kind of community center that could help with the food movement and community enrichment,” she says. “The nonprofit has the goal of 50 percent food sustainability by 2018. We want to provide food that is familiar to our local palette but is locally-sourced and affordable so we can re-educate our community about eating locally, affordably and healthily because it can be done.”

In Dec. 2014, the Kohala Village Hub was awarded a $100,000 grant from the U.S. Department of Agriculture Local Food Promotion Program to equip a commercial kitchen and develop a retail food shop. Ideally placed across the road from the Hawi Farmer’s Market, the KVH will serve to connect local producers with consumers.

“There’s a food hub movement going across the nation, which is where the Hub part of our name comes from,” Ah Sam comments. “We’re looking to provide some kind of food activity in the front building, a place for farmers to sell their things or a ‘grab and go’ food shop with locally-sourced healthy items. Backyard farmers will also have the ability to come and bring whatever is falling off their trees and then trade, keeping us moving towards that 50 percent sustainability goal for Kohala.”

Construction is still underway on some of the KVH buildings, but others have been completed and are now being used for classes. Drawing on the talents of local Kohala residents, the enrichment programs now offered provide a network of holistic support for healthy living.

“We have a ‘Keiki in the Kitchen’ class for the seven- to 11 year-olds that actually gets them in the kitchen cutting their own local vegetables and preparing their own food,” Ah Sam says.

There is also a wide variety of offerings to nurture artistic, cultural and lifelong learning.

“Michal Carrillo teaches her hip-hop classes with us and we do a lot of fitness and wellness,” Ah Sam says. “We also have some homeschool enrichment classes to serve that community during the daytime.”

After school, an electronics class has been very popular, and spring classes also include ukulele, a variety of dance classes and a growing theater arts program.

“Jack Boyle is starting to build up more of a theater program here,” Ah Sam explains. “He’s working on a two-person production called the ‘Gin Game,’ about two elderly people that are in a care home, featuring Eileen Hartwings and Carla Orellana. Also, Jack’s going to be working with the kids, doing a children’s play that will be launching in May or the beginning of June.”

Another spoke in the “Hub” will be providing a gathering place for community and private events.

“The KVH property has several buildings that will serve a variety of community functions,” Ah Sam says. “We’re just completing construction on the barn and we’ve converted the old Luke’s truck garage into multi-purpose farming space. A lot of people are now booking it for graduation parties and things of that nature. Everybody’s also been wanting us to open up Luke’s (café) again.”

The front building also contains spaces that will function as anything from a dance floor to a museum exhibit hall.

“We’re looking at how to keep the old dance space where people used to come and do ballroom dancing as a multi-purpose space so we can do educational art exhibits there,” Ah Sam says. “I’ve talked to Chadd (Paishon) about bringing the voyager exhibit up here, but the first exhibit we want to do is on local farmers. We’re taking photos of 10 local Kohala farms to promote local agriculture and as a way to get to know our farmers. And when it’s not an exhibit space we’ll be able to provide community social space. Like at Kahilu Theatre, you can mix different venues and keep things educational and flowing that way.”

Along with meeting venues, the 19 inn rooms in the KVH complex offers a complete retreat venue.

“This week we have Jim Jarret, a well known film producer, actor and acting trainer with a troupe of 12 actors from around the world, staying at the inn for a 10-day program,” Ah Sam mentions.

Retreats like this are also a way for the theater arts program to grow. “He will be coming back in the summer and offering one of his productions called ‘Vincent’ as an internship program for a few local community members who want to learn how to do the technical side of theater or understudy work. In July, he’ll do another retreat and then stay on for two weeks to do a community workshop,” she adds.

But none of this would be accessible to community members if it wasn’t affordable. Efforts are being made to keep costs down by providing sponsorships with funds raised through grants and fundraising events.

“One of the things we really looked at is what our community can afford because we really want to support them through the enrichment. We’ve been able to reduce the cost by almost 50 percent,” Ah Sam says. “We had a concert with Sonny Lim last weekend and all the proceeds from the door went to support sponsorship programs so we can offer discounts to families,” she adds.

For Ah Sam, the KVH is a seed planted in fertile conditions that will thrive and perhaps spread beyond its boundaries.

“For me, it’s been so important to focus on the resources and strengths of the Kohala people and what they have to contribute to the rest of the world. If we can build upon what makes us so special here in Kohala, then we are naturally inclined to be the leaders of our Island community, the state and the world.”