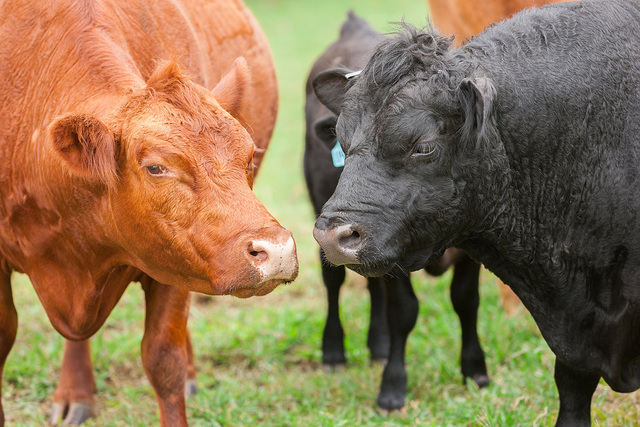 Cows at Hawaii Lowline Cattle Company are born and raised in the pasture in Hamakua. (PHOTO COURTESY OF DARRYL WATANABE PHOTOGRAPHY) 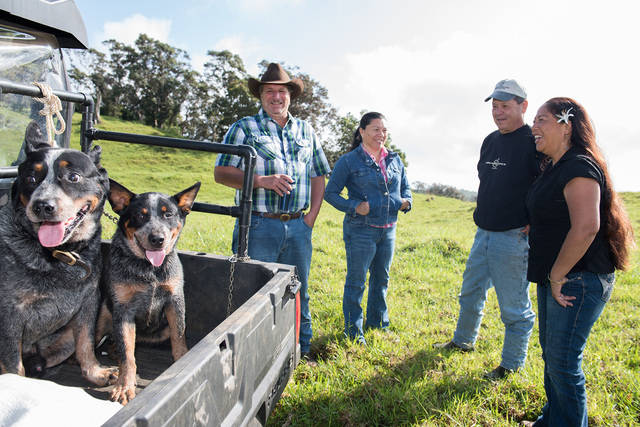 The Sakatas and Cyprianos prepare to go out on the ranch with their herding dogs. (PHOTO BY SARAH ANDERSON | SPECIAL TO NORTH HAWAII NEWS) 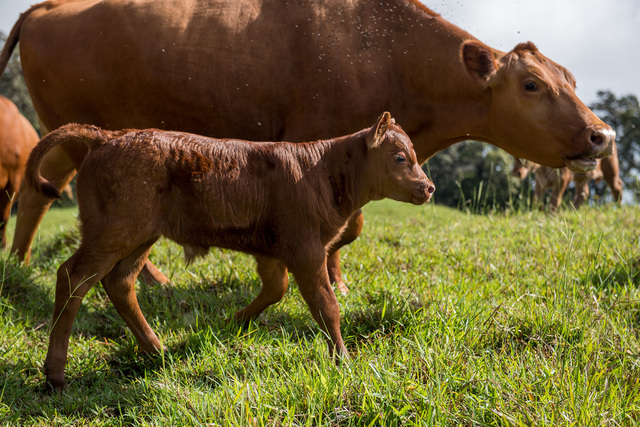 Calves stay with the herd for a minimum of six months at Hawaii Lowline Cattle Company in Hamakua. (PHOTO BY SARAH ANDERSON | SPECIAL TO NORTH HAWAII NEWS) 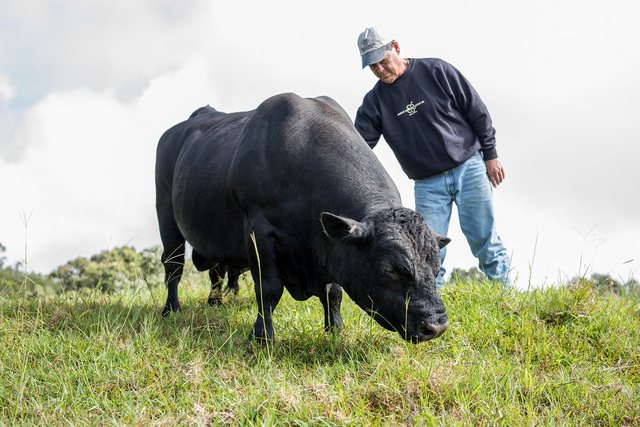 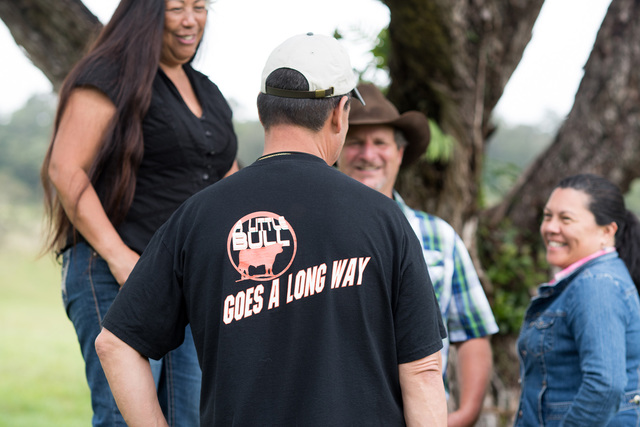 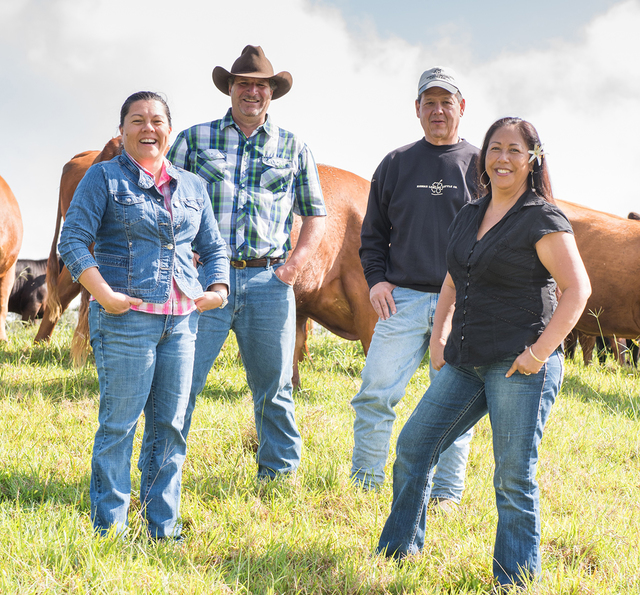 It’s a sunny Saturday morning and Rick Sakata, one of the owners of Hawaii Lowline Cattle Company, greets me at the gate of a verdant Hamakua pasture of upward rolling hills dotted with tall ohia. A colorful herd of cows grazes happily while calves frolic.

As Sakata whistles, we make our way into the pasture. With the original bull, Conquistador, at the lead we soon find ourselves surrounded by curious bright-eyed creatures that settle down comfortably as if waiting to be told a story.

This is the main herd of the Hawaii Lowline Cattle Company (HLCC), a small, unique Hamakua ranching operation that produces high quality, 100% grass-fed beef. Owners Rick and Haleakala Sakata and Dwayne and Tammie Cypriano wanted to support food security and self-sufficiency on Hawaii Island and created a business that is in alignment with their lifestyle and belief systems. They each play a different role, from marketing and accounting to herd management and records.

“We wanted to keep the cattle here in Hawaii and be sustainable. We’re as natural as you can get and that’s what we wanted. These cattle are born and raised in this pasture,” Sakata says.

The herd began in 2008 when HLCC flew in one Lowline bull and five half-blooded cows. In Sept. of that year, one of the cows already impregnated when she arrived gave birth to the first of their Hawaii-born herd. The second pure-blooded bull was flown in from Iowa and their third bull, first to be born in Hawaii, came in 2013. The herd has also been augmented by Red Angus cows from Hawaii Island.

One of the short, wide Lowline bulls trundles over to us and acts more like a friendly puppy than a bull.

The two couples decided on the Lowline cattle breed, developed in Australia, because it is compact. The bulls are around four feet at shoulder height, making them particularly adapted to grazing which produces tender, flavorful meat.

The Lowline traits make it possible to raise and sell the beef in Hawaii. While other breeds need to be sent to feedlots and finished off with grains to get the marbling, the HLCC herd feeds exclusively on kikuyu and pangola grasses and a leguminous clover called trefoil. This makes it possible to raise the cattle with a rotation system between three paddocks on 205 acres.

Along with American Grassfed Association (AGA) certification, the HLCC operation is also Animal Welfare Approved by the Animal Welfare Association (AWA). This means there are yearly audits to ensure that every aspect of the treatment of the animals creates minimum stress and promotes a state of general good health.

“We’re the only (AGA and AWA) certified grass-fed ranch in Hawaii,” Sakata says.

Also, because of their size, two Lowline cattle can graze on about the same amount of pasture as one regular cow and produce more meat.

“Happy cattle makes good meat,” Sakata says, and this approach has determined how HLCC does business.

The calves are weaned slowly and stay with the herd for a minimum of six months so natural conditions are allowed to prevail.

“These animals get no medications and the bull stays in the pasture with the cows at all times,” Sakata says.

When the cattle need to be moved, it’s done with whistles and hand signals, which is what Sakata uses to call the herd over to us.

There is now much evidence that consuming sustainably produced meats provides higher levels of omega-3s and other vital nutrients, as well as benefiting the environment. However, buyer beware: the grass-fed label has different definitions depending on who’s using it.

According to AWA, many grass-fed labels allow for cattle to be confined to feedlots for some percentage of their lives. This means that while cattle can spend the majority of their life in the pasture, it is contrasted with as much as a third of their lives spent in barren confinement, possibly having a negative impact on the animal’s health and the quality of the meat.

Also, according to AWA the USDA’s voluntary grass-fed standards only stipulate that animals have “access” to the outdoors, which can render the grass-fed label meaningless.

Foraging animals can have a positive impact on the environment. Properly rotated herds actually stimulate the growth of grass and prevent degradation of the environment through carbon sequestration.

“As cattle and other ruminants graze pasture they stimulate the growth of grass, which absorbs CO2 from the atmosphere through its leaves and stores it in a mass of roots under the ground in a far more stable form of carbon,” it states on AWA’s website.

The proof is in the flavor

HLCC beef is sold directly to the restaurant as a whole cow, which is slaughtered at the Hawaii Beef Producers operation in Paauilo, also AWA-approved. The purchaser, usually a chef, can then determine how the carcass is processed. This makes for less waste since all of the animal is used.

HLCC beef is quickly gaining a reputation for providing delectable, tender meat at the center of gourmet meals. Having to use the entire carcass has also inspired creative new dishes.

“Two of the chefs on Oahu, Ed Kenney at Town Restaurant and Andrew Le with The Pig and the Lady, who use our beef were nominated for the James Beard award,” Sakata says.

If you have dinner at Merriman’s in Waimea, you will probably have the opportunity to try one of a variety of HLCC beef dishes. But if you’re in the mood for a gyro, you can get one stuffed with shaved slices of HLCC beef at Dano’s Doner in Waimea. If you want to cook in, try George’s meat market in Hilo.

Any way you slice it, HLCC is doing it Hawaiian-style, sustainably producing beef that stays in the islands to feed humans and the environment.